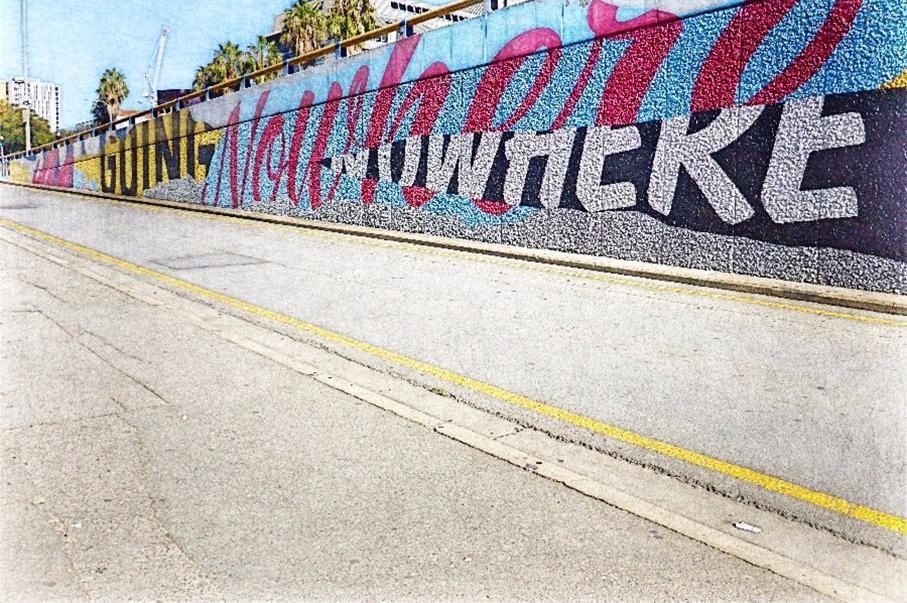 A matter of milk 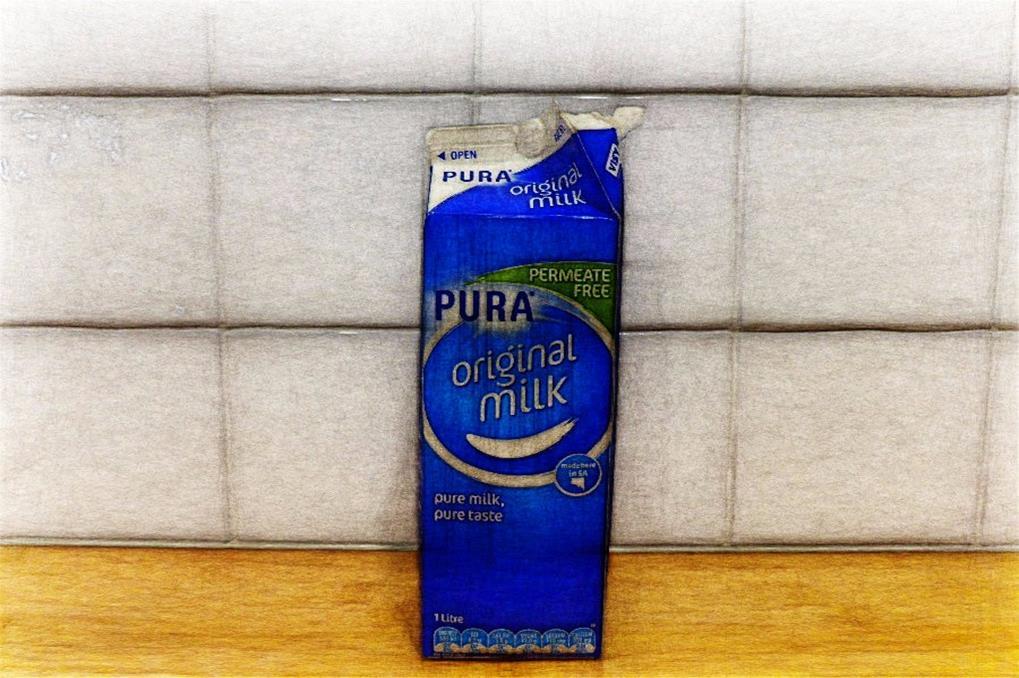 On the fridge at my work there is a sign about the milk. The sign says that company milk is for use in regular teas or coffees only. If you want cereal or porridge in the morning then you better get some private milk.

There are other signs too. There is a sign about the spoons: everyone is meant to wash their own and return it to the cutlery drawer. People aren’t meant to just throw their used spoons in the dishwasher. They have actually gone to the step of removing the dishwasher cutlery tray to enforce this.

Then there is the sign above the coffee machine gravely warning against the use of non-genuine Nespresso pods as they may damage the appliance and make the warranty on it void. The few times I have used this precious machine I have made a special point to only use non-genuine Nespresso pods. This is petty and out of sheer spite, of course, but you have to take the small victories in life when you find them.

But the matter of milk is the longest standing and most grave. The previous day, as her most urgent task, the manager of corporate services sent out a company-wide email, the fifth in the string commenced some two months prior. The email read:

In the last two months we have increased the amount of milk supplied to the company several times. However, we continue to run short each day. As such and as a matter of urgency, PLEASE STOP USING COMPANY SUPPLIED MILK FOR FULL MILK COFFEES, MILK SHAKES OR CEREALS. COMPANY SUPPLIED MILK IS STRICTLY FOR USE IN REGULAR TEAS OR COFFEES, WHICH ONLY REQUIRE A DASH OF MILK.

The email went on to state some hard data: in the last month, daily milk usage in the company had averaged twelve litres. This was an all-time high. This was unsustainable.

The following morning my friend Roger, a man on the verge of retirement after a long and unexceptional career and acting like it, sent out an email of his own. This email contained an attachment to a photo of a vandalised carton of milk.

Someone in our company, not for the first time, had tried to open the milk from the wrong side and they had made a hash of it, ripping and disfiguring the spout to the point where it did not pour the milk properly and could not be folded back in. The attached photo contained two circles in bold red, one around the mangled side and one around the untouched, ‘Open Here’ side. Roger’s email read simply:

To the person who continues to finger the carton of milk from the wrong end, please stop. There is a better way. It doesn’t need to be like this…

I had noticed the so-called ‘fingered’ cartons of milk in the fridge and I had wondered about them. Roger’s email caused the expected smirks and scoffs around the office. It was a good email.

At ten o’clock that same morning the branch held a meeting in the boardroom, so called because of the framed black and white photos of the chairs of the board, past and present, hanging on the wall. (The photos of the former CEOs of the company, all of who were middle-aged men of some decrepitness too, hang on the same wall.)

The following is the most accurate account of this branch meeting memory allows.

Dave [Manager]: Good morning, everyone. Thank you all for coming.

This was perhaps an overly formal introduction considering that on this particular morning, thanks to a bout of illness and one unexplained absence, ‘everyone’ consisted of five people in total.

Dave: We’ve got quite a full agenda today so it’s a shame Jamie-Lee isn’t here, but I’ll begin with some meeting updates.

Jamie-Lee was one of two General Managers in the company, which in our corporate structure sat under the CEO and above the branch managers. (These positions have historically been filled by women but their photos don’t hang on any wall, of course.) The point of the GMs coming to routine branch meetings was for them to ‘listen’ and to ‘learn’. But ten o’clock was still a bit early in the day for that, admittedly.

Dave: The Finance and Risk Committee met last week and the issue of correct storage of private information was raised ahead of the external audit next month. You are reminded to read the guidelines on the intranet before the audit.

Roger: Are they going to be ringing us up again?

Roger: The auditors. They gonna be calling us again?

Dave: I’m not sure what they are doing.

Roger: Will we be judged on how politely we answer the phone again?

Roger was being quite facetious here. It had been some time prior that the company had hired external people to ring up every single member of staff and judge how politely they had answered the phone. They were also meant to judge how helpful you had been in answering some made-up, bullshit query. It was the most bizarre thing because you knew you were talking to a fraud and yet you felt obliged to play along because you didn’t want to get a bad score. What the company did with the results of this exercise was anyone’s guess. But they probably filed them away.

Dave: At the OH&S Committee we received another complaint about people wearing overly strong perfumes and colognes in the office.

Roger: It’s Jenny the accountant with the sensitive nose and Ola the Russian beauty queen with the Chanel No. 5.

Dave: Well, we don’t know who it is, we’ve just received this complaint.

Roger: It’s Jenny with the nose and Ola with the No. 5!

Me: He’s right. We all know. And it’s about more than just the perfume.

Susan [Team leader]: Yeah, they really hate each other, those two.

Dave: Well, anyway, whoever complained about whoever, you are still reminded to read the guidelines on the intranet…

Dave: Now, moving on, we had a management meeting yesterday and the current milk shortage was discussed again. Our current rate of usage has us going through twelve litres of milk a day and that is unsustainable in the long-run.

Roger: Based on what?

Dave: Well, it’s a lot of milk each day.

Roger: A lot of people in the company.

Dave: Not that many.

Roger: About a hundred.

Roger: Makes it 120 millilitres of milk per person per day.

Roger: Maybe for a kitten!

Dave: I believe they have been.

Dave: I believe they have.

Roger: What is the retail price of one litre of milk, anyway?

Dave: Molly does the shopping at our house, I don’t know.

Sara [Graduate]:  You can get a carton of milk for a dollar if you shop around, Roger.

Roger: So that’s only twelve dollars a day for milk for the whole company. Sixty bucks a week.

Roger: Doesn’t seem like a high price to pay to keep the workers contented, Dave.

Dave: Well, I don’t know about that and I want to talk to you about that email you sent this morning.

Sara: That was very funny, Roger.

Susan: Well, they shouldn’t be sending out such patronising emails either. They should just buy more milk!

Dave: I believe they have been!

Me: Did you know that two-thirds of people cannot digest cow’s milk properly?

Roger: Then who the fuck is drinking all this milk!

Me: It’s true. Two-thirds of people do not produce enough of the necessary enzyme to break down the lactose in the milk. It all depends on your ancestry, apparently.

Susan: That’s interesting. I wonder if I should be drinking milk because I sometimes feel funny afterwards.

Me: Are you Asian?

Susan: Do I look Asian to you?

Susan: Do I look Eurasian to you, Peter?

Me: You should be fine then. Northern Europeans were big cattle herders back in the day.

Me: Then you probably shouldn’t be drinking milk.

Dave: Anyway, please, let’s move on to the next agenda item. Let us not dwell too much on who can or who cannot digest milk and whether the company’s milk usage is sustainable or not.

Roger: You’re the one who brought up the subject!

Dave: I did, and you are obviously reminded to read the guidelines on the intranet and limit your daily milk usage to regular teas and coffees, and if you are unsure, please purchase an ancestry DNA kit over the internet to determine if you are able to digest cow’s milk properly. Now let’s move on, OK.

Dave: Now, another thing that came out of the management meeting yesterday is that one of you has to go to some training that they’re gonna be doing shortly…

Susan: Could you be just a little bit more specific, David?

Dave, in a mild panic, rummaged through his stack of papers while everyone else made slightly different versions of the same impatient face.

Susan: Got it now?

Roger: I’ll be retired by the time they get to the really good bits!

Dave: Yes, I didn’t think you were going to do it, Roger.

Roger: And Susan is already a team leader and self-empowered and knows how to empower her team.

Roger: And Sara is only a graduate so she can’t do it.

Me: Hang on, what about Josie and Tim?

Roger: They’re not here and you are, mate.

At that moment Jamie-Lee, the General Manager, shouldered the door to the room open.

Holding a bowl of porridge against her waist like a rugby player carrying the ball, she bustled across the room to the head of the table. She put the said bowl down on the said table and then collapsed in the armchair with a force exactly equal to her own weight multiplied by her acceleration.

Dave: I was just updating the team on meetings from the last fortnight.

Dave: Well, the Research and Dissemination Committee met on Monday and went through our latest suite of published reports…

From this point on my memory of the meeting is less clear. Dave obviously kept banging on about the various committee meetings he had attended in lieu of doing actual work but I was more concentrated on Jamie-Lee and her porridge. She started stirring it. Yes, she did. The steam started rising from it and it made her skin, caked with make-up, gleam in the light. Then she started blowing on the porridge and she even licked the back of her spoon. Yes, she did. I remember looking over at Roger looking over at Jamie-Lee with a distinctive where-the-fuck-did-the-milk-for-that-porridge-come-from? expression on his face. I couldn’t take it anymore…

Me: Sorry Dave, can I ask a question?

Dave: Sure, go ahead.

Me: It’s for Jamie-Lee actually.

Me: OK. I was just wondering, is that almond milk in your porridge?

Jamie-Lee: No, it’s regular milk, why do you ask?

Me: No reason, it just smells very nice.

Jamie-Lee: Yes, I have it every day, I love it.

Me: That’s interesting. Ever have problems opening the carton?

And with that Dave did what any good manager would have done at such a moment and started bullshitting as quickly as his brain and mouth allowed. Jamie-Lee, properly confused and distracted, forgot about my question and that was just as well. I looked over at Roger again and he was smiling the proudest of smiles at me. He pointed his finger at me and mouthed the following.