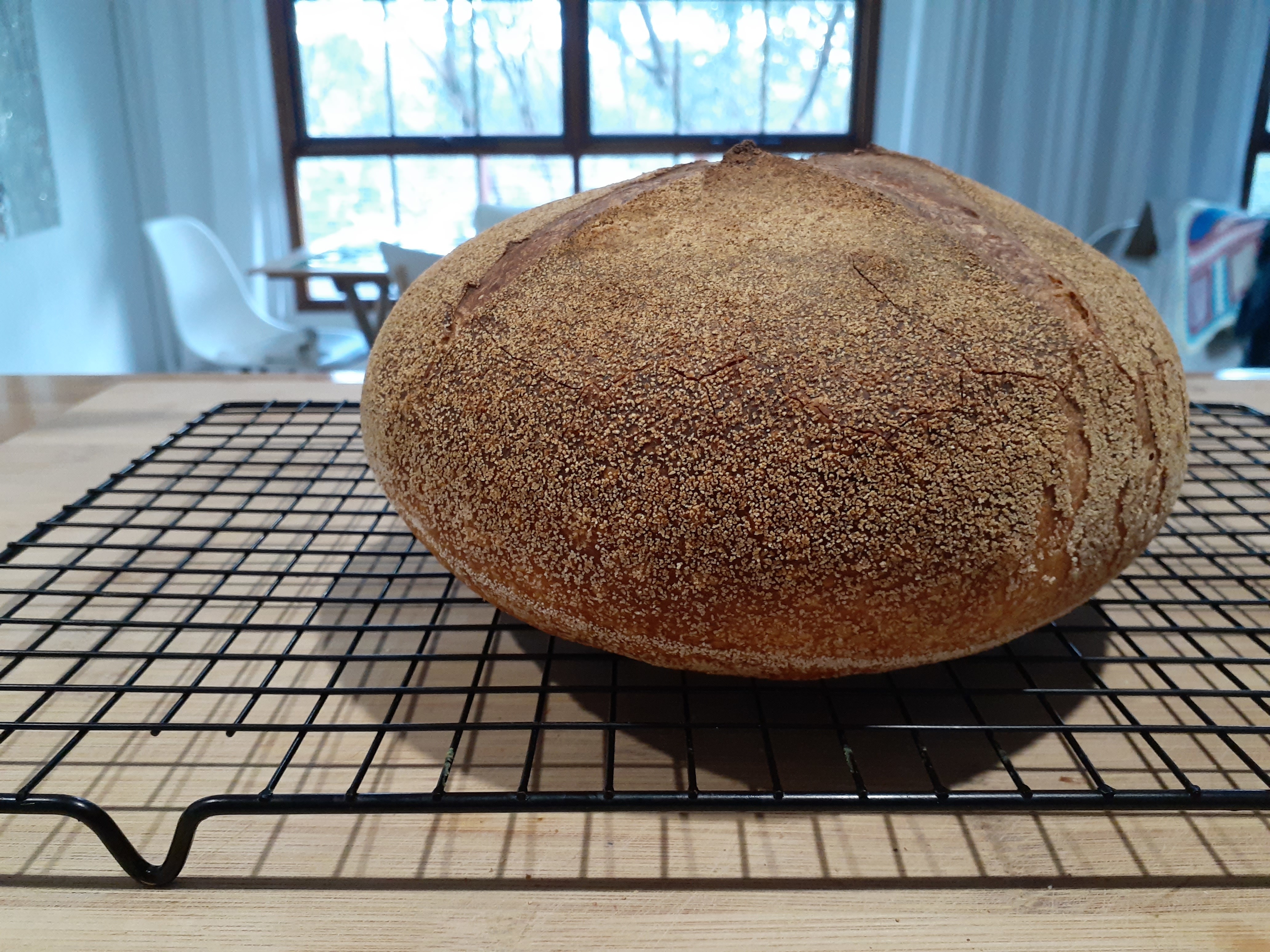 It lives in a plastic container in the fridge, next to the jar of pickles. And you got it from a friend. You didn't make it from scratch, feeding it every day for a fortnight. Because you have a life. Because you just want bread, not yet more responsibility in your life.

To revive the starter, add 1 cup of flour and 1 cup of water.

Do this in a mixing bowl (you'll see why later).

Your sourdough starter is revived and happy when it looks like this: frothing on top. 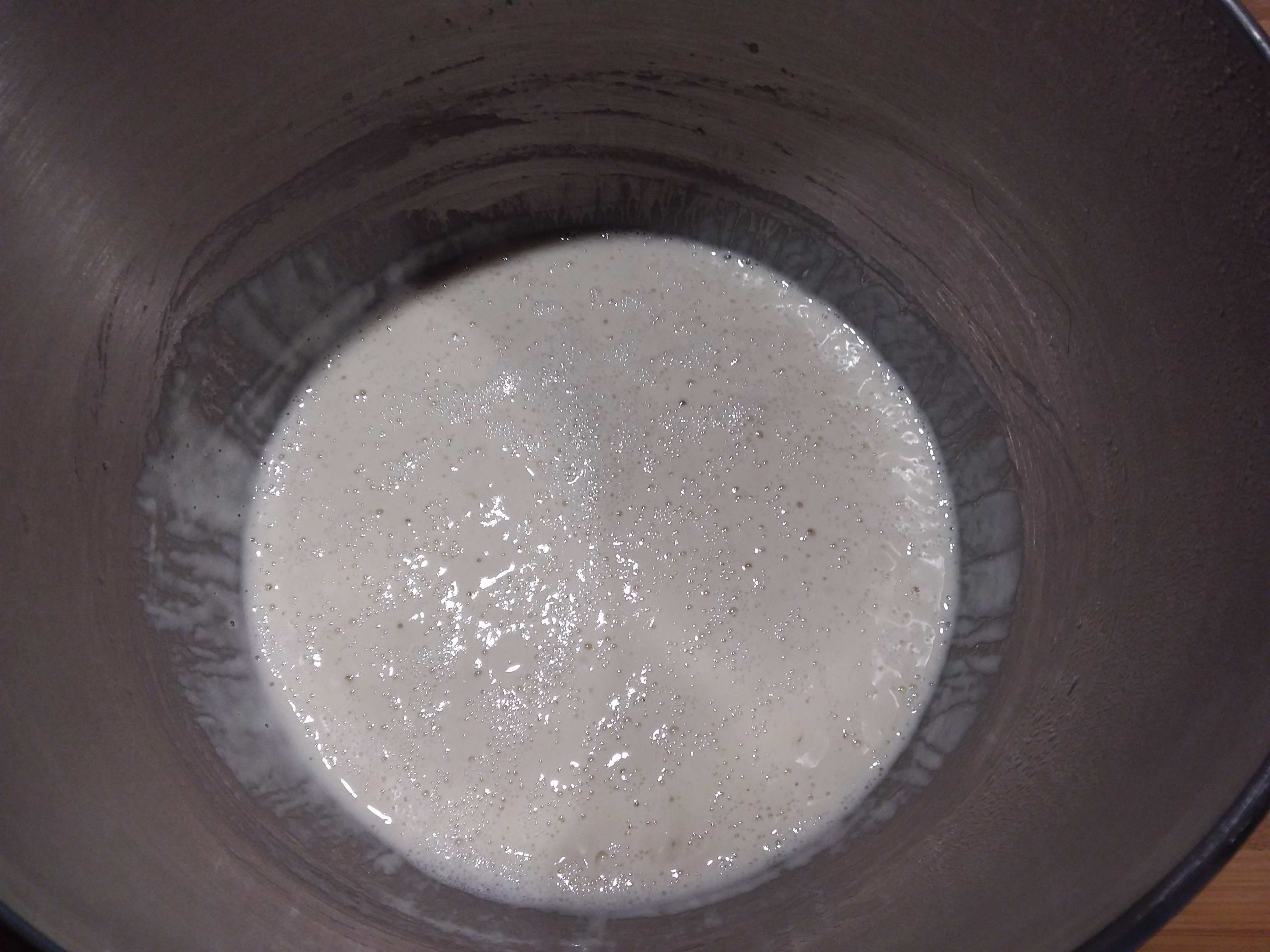 The most important step in making sourdough

Put half of your starter back in the fridge for next time.

If you forget this step, there won't be a next time. A farmer doesn't milk his cow and then let it wander off, never to be seen again. He wants milk tomorrow too. Same concept.

Add 3 cups of flour and 1 cup of water to the starter. Add 2 teaspoons of salt.

In total, you've now added 4 cups of flour, 2 cups of water, and 2 teaspoons of salt.

Remember 4-2-2 for delicious bread. As they say in the UK, dead easy.

Use a mixer with a dough hook (hence the mixing bowl) to bring it all together.

Go easy on your mixer by using a low speed. The machine will last longer. It will still work the next time you want to make bread.

Of course, you could use your hands to mix, but this will not make the bread taste any better. And only in your head will it make it more 'artisan'. After 2 minutes of gentle mixing, lift the dough hook up for inspection by the resident bunny rabbit. 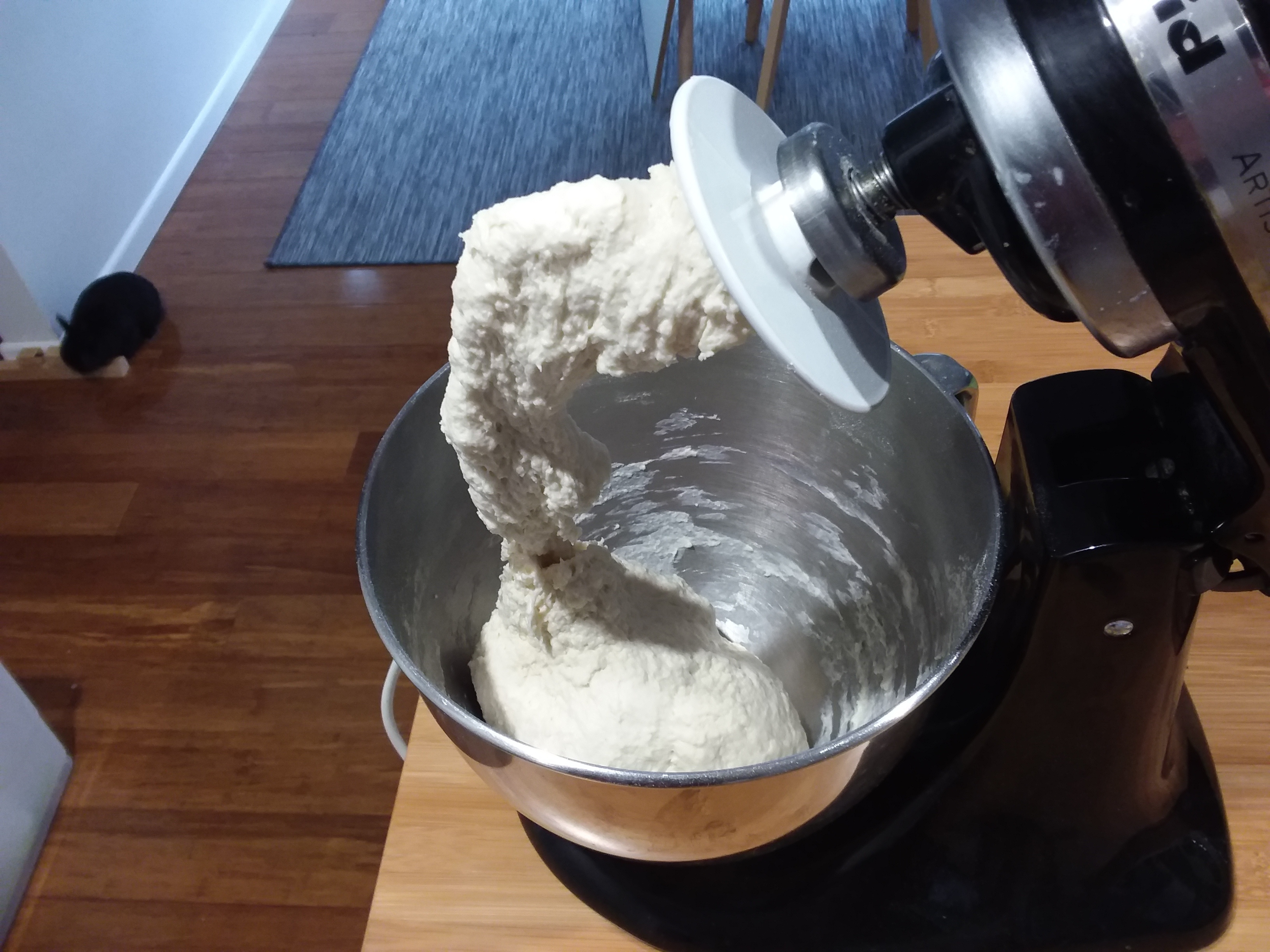 Sourdough isn't really sour: it's tangy. What makes it tangy is lactic and acetic acid, produced by millions of bacteria feeding on the flour's sugar. Leave these good guys alone to have their fun. Cover the bowl with a cloth and forget about it, again.

When the sponge is puffy and billowy (yes, like a sponge), it's ready to be shaped. 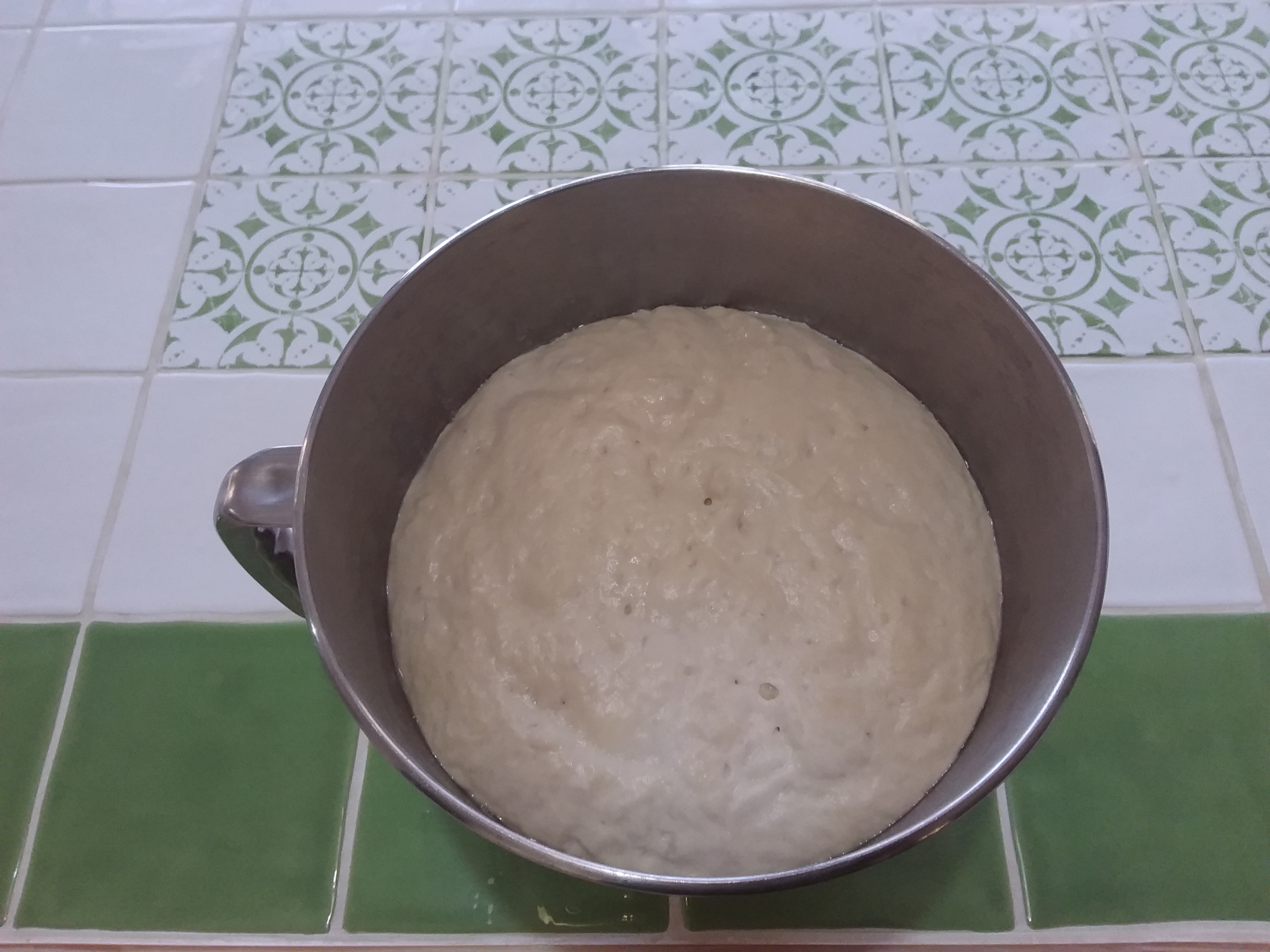 Tip the sponge out onto a well-floured bench. When I say well-floured, I mean well-floured. Or don't use any flour at all and see what happens — you'll still be trying to get bits of dried dough off your bench a week from now.

Knead the dough. Just a bit. You have to.

Feeling anxious and frustrated in this modern life? Unable to cope? Go ahead and pound away on that dough for as long as it makes you feel better. Otherwise, a couple of minutes of gentle kneading will do.

Time to proof (or prove). Grease the mixing bowl with butter, coat with coarse semolina, and drop the dough back in. The semolina will prevent the dough from sticking to the bowl. It also helps to make the crust crustier.

Same deal as before: cover the bowl with a cloth and forget about it. When the dough has doubled in size, it's time to bake! Tip the dough out onto a baking tray. Then slash it on top with a sharp knife. 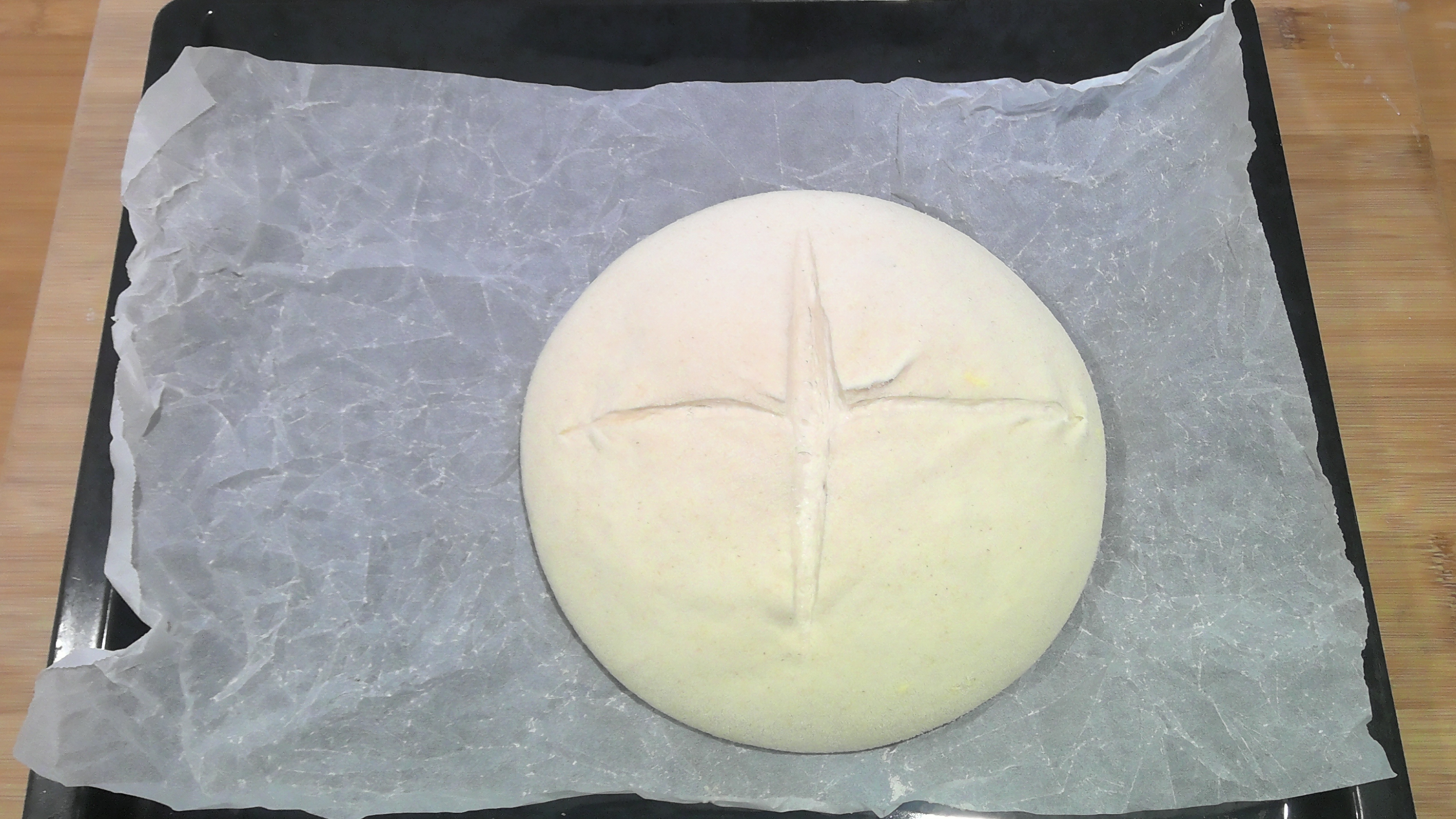 Bread is baked at a high temperature: 240oC or 464oF. And you want to over do it, if anything. Trust me on this: give it another 5 minutes.

All up, between 40 and 50 minutes in the oven, depending on whether it's made in Germany and works properly or not.

I shouldn't need to say it, but I will: don't post a photo of your sourdough on Instagram. No one really cares. Write a blog about it instead! I mean, look at those holes... 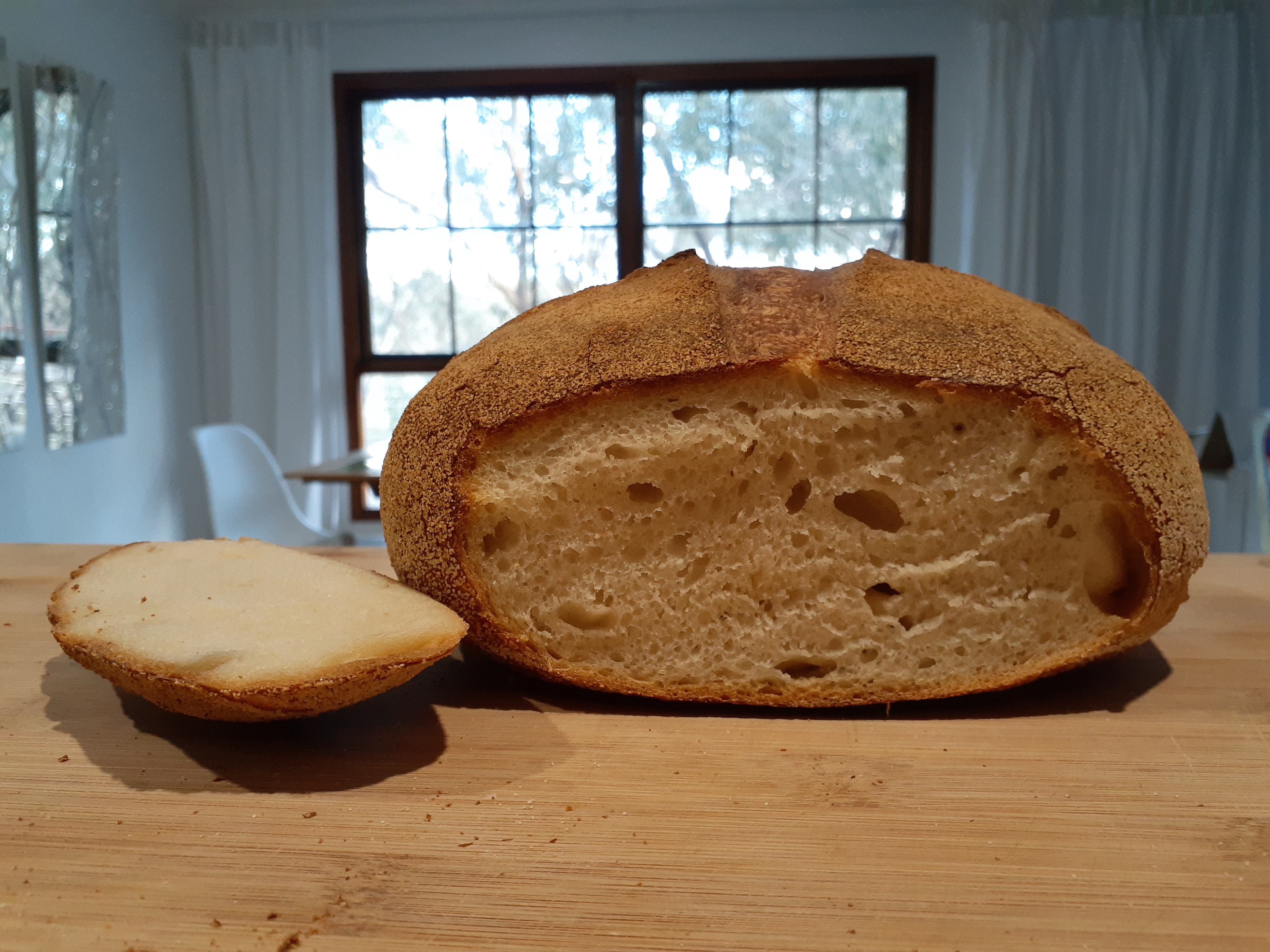 1) Don't cut your bread too soon! Let it cool down for at least half an hour. This is as important as letting meat rest after cooking.

2) Put a second (smaller) tray of water in the oven when baking. The steam produced by the boiling water helps to form a better, crunchier bread crust.

3) When reviving the starter or proofing the dough, put your bowl in an 'esky' (Australian for ice box) with a hot water bottle. This speeds things right up. In summer, when the whole house is one big sauna, don't bother with this.

* Not guaranteed. I am not a professional baker. I'm just another guy out there.