When my friend went on Who Wants to Be a Millionaire? 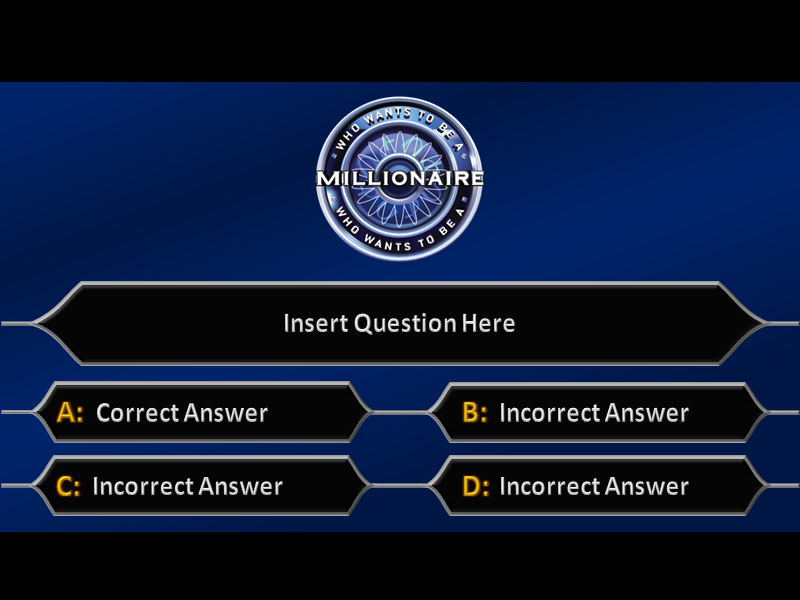 Even though I counted him as a friend it never escaped me that he was a bit of an odd character. For one thing, he was in his mid-thirties and still lived at home and had no plans to move out. Unlike other mature-aged students I knew he didn’t seem proportionally more interested in his chosen field of study, applied mathematics, than the rest of us; in fact, he didn’t seem interested at all, which might explain why he wasn’t particularly good at it. He only seemed to be going to uni so that he could keep on getting the dole at the same time as having somewhere to go each day.

He was interested in and good at other things though. He was a former state chess champion, having beaten a local grandmaster — or at the very least some unemployed guy with a high internet rating — in the final. And he was very, very good at trivia.

When he said he was going on the show I secretly hoped that he would choose me as his phone-a-friend. I think I imagined helping him win the big money and getting a cut. But he wanted to increase his chances by having as many people in the room as possible. This was fair enough but it put a dent in my pride, for sure. In the end it was arranged for all of us, the whole chess club gang, to meet in the office of Robert the PhD student in the bowels of the old University of Adelaide mathematics building and await the phone call, should it even come at all.

Although the show aired primetime in the evening, for television reasons it was taped during the day a week in advance. I arrived late because of a tutorial and discovered that the answer to the question How many people can you fit into the small office of a PhD student? was: at least one more!

We were jammed in like the proverbial sardines in a can. The guys from the chess club had all come but there were also people there I’d never seen before, fellow trivia buffs my friend had asked to come.

We waited for the all-important phone call. It started getting real hot and stinky in that tiny office. Still we waited…

I wasn’t happy about it; I thought there were people in that room that shouldn’t have been there because they weren’t good at trivia like me. I now didn’t care how my friend went.

Eddie, the one and the only, spoke for a bit and then when he had finished Rob laughed nervously and replied, ‘Yes, yes, all here waiting, yes.’

Eddie then said something and Rob straightened his back and raised his eyebrows and said, ‘Wow, that’s great, wow.’

My heart was pounding now; my friend must have been playing for a huge sum. Holy shit, this was unbelievable!

Eddie spoke again for a bit and then Rob said, ‘OK, good, we’re ready, fire away.’

Pleasantries over, my friend in the 'hot seat' took over and started reading the question and this meant his time had officially started running (you only had thirty seconds in all, remember).

‘Where did the artistic and social movement known as futurism originate?’ repeated Robert in a tone one normally only uses when talking to the deaf or those who can’t understand English very good. ‘France,’ he continued repeating much too clearly, ‘Germany, Italy, or Spain?’

He then immediately started typing on his keyboard before stopping to look annoyed at something on his screen and then madly typing some more.

There was nothing for a second and then someone, one of those people I’d never seen before this day, said, somewhat unconvincingly, ‘I think it’s Germany.’

‘Got someone saying Germany,’ Rob dutifully repeated down the line. But he continued to look annoyed and shook his head at something.

And then, as it sometimes does in life, all hell broke loose. ‘No, Italy, ITALY!!!’ my friend screamed into the phone.

He put the receiver down, leaned back in his chair, and puffed out his cheeks. His face was flushed like he’d just done the hundred freestyle in Olympic qualifying time.

‘What happened?’ someone asked.

‘The stupid thing, you know, the search engine, it crashed on me and I had to refresh it,’ Rob said.

‘How much was he playing for?’ I asked.

‘Fucking hell!’ someone else said.

‘I’m sure he got that it was Italy. I’m pretty sure.’ He nodded his head.

‘Fucking hell,’ someone else repeated.

There was no news for a week. We didn’t see our friend at uni and no one tried getting in contact. There was no point, he wouldn’t have said what had happened anyway: secret TV rules. I sat down to watch the program with my parents in the living room the following Monday night ignorant to my friend’s ultimate fate.

He got in the hot seat on the first go and from there on was the star of the show. His natural weirdness played well on TV. He was fidgety and kept rubbing his chin thoughtfully, but above all he was funny. At one point Eddie told him to calm down and have a glass of water and my friend replied that he better not because he’d had one before the show and it had gone straight through him. The live audience laughed at that. Eddie loved it too.

He wasn’t just funny; he was good. He advanced to the $16,000 question without having to use any of his three lifelines. He only asked for the audience’s help to confirm his suspicions more than anything else. Then he answered three more questions without hesitation, including one about King Henry I thought was a real doozy.

But then came the question about futurism. You could tell he had no idea when he told Eddie, ‘I have no idea.’ He quickly decided to use a lifeline and asked to phone a friend.

The call was put through. Rob answered. On TV he didn’t sound nearly as nervous as he had appeared in that tiny, stuffy room a week prior. Still, the banter between he and Eddie wasn’t exactly TV gold and so Eddie moved things along pretty swiftly.

As soon as my friend started talking the thirty seconds at the bottom of the screen started counting down. He actually made a small mistake in reading out the question and had to correct himself and that cost a few seconds.

You could hear Rob repeating the question and the four possible answers to us in the room.

Then you could hear his typing on the keyboard, a break, and then more mad typing.

Then he said, ‘Got someone saying Germany.’

And then the clock hit zero and the line went dead.

My friend was clearly perturbed. He wasn’t comfortable with the Germany answer and started rubbing that chin extra hard.

Eddie gave him a moment.

My friend ummed and ahhed and started shifting around in his seat. He was stalling.

Eddie said he needed an answer.

My friend asked for the ‘fifty-fifty’. This meant that two of the incorrect answers would disappear, leaving a fifty-fifty chance of getting the question right.

And wouldn’t you know it, France and Spain disappeared from the screen.

You could see my friend’s eyes light up with dollar signs. He shifted in his seat again, this time out of excitement.

Eddie gave him another moment before asking for a final answer.

My friend looked up, either to God or the studio lights hanging from the ceiling. Probably God.

Then he looked at Eddie and said, ‘Lock in Germany, Eddie.’

In economics and other lesser social sciences you learn about loss aversion, the theory that monetary losses have a more powerful psychological affect than equivalent gains: so most people prefer not to risk losing a $100 to win a $100.

I say probably; it’s hard to assume anything else. The guy quit university and I never spoke to him again.

Six months later I heard that he was in dispute with the producers of the show. I’m not sure whether he disputed the answer or the very question itself, but he clearly had not accepted his loss, or rather his win. He planned to sue in court, which sounded like a wonderfully clever idea to me.

I also learnt that he spent his days walking up and down the same stretch of beach beside his home, wondering what might have been. And he still blamed us, the people in the room, for what had actually been. This was understandable since we had definitely given him the wrong answer.

But had he thought about it he may have appreciated the moral of his story, which was that in some instances you can have too many friends; those instances being one very small room and having everyone in it at the same time. And also that you really should refresh your internet browser on a regular basis in situations when ‘time is money’.

I saw the guy on two occasions in the following ten years. Both times his overall appearance was best described as scruffy and not-looking-like-he-had-anywhere-important-to-go-to. It was impossible to tell what was going on behind those vacant eyes but I hoped he had found that thing Americans call ‘closure’. More than that I hoped he’d finally come to see the upside: he’d been on telly, won a bit of money, and he’d met Eddie. And that’s pretty good.